...When you know you are on the threshold of insanity, or entering the "darkside." 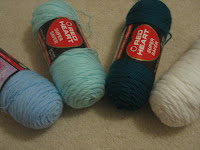 It all started with a lovely walk down Walmart lanes. I had the whole idea of learning how to do granny squares and knitting a really cool looking afghan. This isn't your orange-white-red combo, mind you; something simple, pleasant, and appealling to the common eyes. 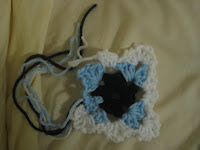 So ok. Maybe this first go wasn't so sucessful. I wasn't even sure I was double crocheting correctly. 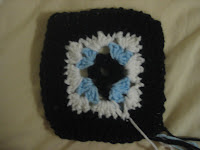 The second go was a lot more sucessful. If it weren't for the wonky black and light blue center, this square would look actually quite nicely. 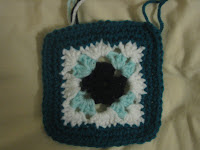 The third go was even more sucessful, but yet the second tier is again a little loose. I decided to do only 3 tiers, since the object started to get more and more circular as you go. Instead of the black double crochet stitch like the second go, this one has single crochet for the border. it looks a lot better. I was thinking that the other color for the borders would alternate with teal and seagreen, in the afghan. Nice idea, yeah? 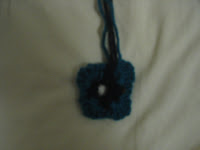 The fourth, fifth, sixth (didn't even really get past this point)... the guage is considerably tighter! I hesitated to go looser, because I didn't want the wonky-tonky business going on. Mistake? Yup. 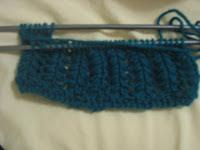 Result??? Let's knit the damn afghan, shall we? I'm going to alternate with the foggotting stitch blocks, picking stitches up along the sides and top and such. I almost considered the trinity stitch for it, instead.

When I was at Micheals, I picked up some awesome ribbon, that I plan to use as my wedding theme. I will put it on the invitations and such, since i'm doing it all by myself. You'll see later on... it will look good once it's all put together. On the right side picture, we are looking at 5 skiens of Sugar & Cream cotton, for washcloths. Colorful and happy-looking... I think so!

Oh my! A book that i'm reading that isn't required for school? You can see that I only got 11 pages through, but i'll pick it up again tomorrow. Bruce Feiler is such an exellent writer/storyteller! I recomment his books to anyone that happens to be Jewish or Christian (or Muslim-- for the book "Abraham")
DID I FORGET TO MENTION THAT SCHOOL'S DONE?!?! I had a great semester, and i'm sure all of my grades will show for it. :)
My FH and I went to Caribou Coffee yesturday, after a couple of months of Starbucks and such, I read some of my book and sipped on their mocha coffee. Now that's mocha!!
Update on Victoria: doesn't look like much, but let's just say that the cabled border took a little while! Then, I had to sew it all around the border-- eeek!! I'm now entering the trinity stitch zone, and am playing with the stitch variation numbers in my head right now. I'll have to figure out how many knit stitches should be in between, or yo's and such.
~*~*~*~*~*~*~*~*~*~*~*~*~*~*~*~*~*~*~*~*~*~*~*~*~*~*~*~*~*
--->I've been tagged!
(by She'sa crafty one)
Rules: if you've been tagged, you have to write 7 random facts about yourself (usually fun and interesting ones) on your blog, tag 7 others and write to the original tagger to read your facts, so they know you've done your part.
1. )I hate beer. I'll go straight for the hard mixed stuff.
2.) I don't watch sports, nor do I know any trivia about them, or care much about it
3.) As a child, I took eleven(ish) years of piano, played flute (without instruction, but still very sucessfully) for six years--before I decided not to play in band anymore, and I sing a lot!
4.) I hate all forms of seafood! And I don't care for steak (bloody and red... yuck)-- I'm a cheap dinner date, aren't I?
5.) I live in the Chicagoland, but I rarely visit the city
6.) Rap, alternative and techno music doesn't do it for me-- I listen to classical, contemporary Christitan/gospel, broadway musicals, baroque, some new age and pop music
7.) I really enjoy cooking. I watch a lot of foodnetwork. However, whenever my FH is supposed to help me cook, I usually hog the cooking!
8.) I'm one of the lightest sleepers in the world, and it's almost always a struggle to fall asleep. My creativity kicks in-as well as songs in my head-around the time when I should be sleeping!
9.) I love to read! I mostly read fantasy novels, some Christianity books, Knitting stuff, Harry Potter... etc. You can look up my list on "library thing" under my profile.
10.) I'm engaged to the most loving, caring and wonderful man in the world. We will tie the knot September 19, 2009 (a million years away still).
...11.) I only have one more year left of college... whoohoo!

Congradulations on the engagement! The wedding isn't that far away:). I always need a million years to perfect everything I do, and I have a feeling that you are the same way. Good luck on the afghan!