Ever just want to knit with something other than just yarn? Well, I was intrigued by the idea of knitting with fabric. Let's look at the positives, shall we? First, you can use large needles. My 1'' wide strips let me use 13's easily, probably even 15's or more (if your stitches don't need to be tight at all). Then, there's the possibility of making rugs, which actually motivated me to knit with fabric in the first place. You can even use el-cheapo yarn, you know the kind that's a dollar a yard at Walmart. Even so, you can use old material the wouldn't normally look that great as a skirt a decade later, one that was lurking in the coldest, darkest conrners of your basement...
However, there is one negative aspect: the coarseness on your hands. Now, this can easily be remedies. There's fleece, silk, and...*cough* more expensive fabric.

With all due respect, I present my first design & experiment with eccentric knits: 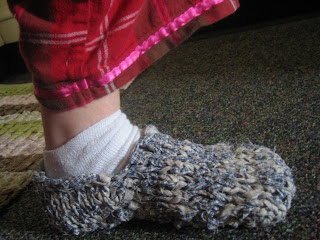 Don't be fooled by the blah-ness of the picture. You can see patches of the blue & white stripes among the offwhite patches. 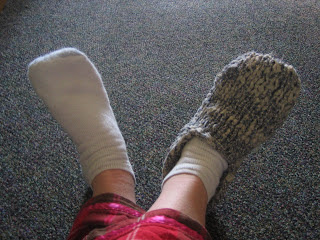 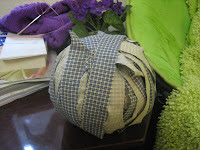 Now the mystery is over, right? Nope.
I still have to buy more fabric and make a rug!

Next Frontier: Knitting with wire!

Posted by Knitting Up A Storm at 4:57 PM

Email ThisBlogThis!Share to TwitterShare to FacebookShare to Pinterest
Labels: Slippers

Those are mad cool slippers. I love knitting with fabric because it goes super quick. My mom made me a scarf knit with fleece strips once, it's probably the warmest thing I've ever owned in my life.

A 30-something femme createrix said...

I LOVE how these slippers came out! Can you tell me what pattern you used? I love the clog-iness of them :D