Here's some ultrasound pics!
The first one is of the 7.5 week shot, when I first found out about the twins... 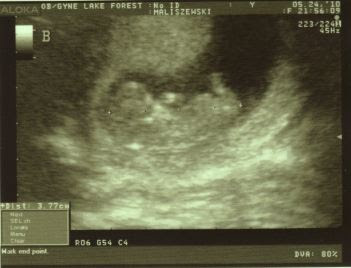 I love this one, especially when it's flipped. You can make out the nose and eyes better, and the feet looks like it had been moving around while the photo was taken. 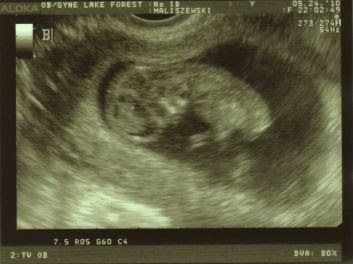 I believe this bottom one is a bird's eye view (of both): 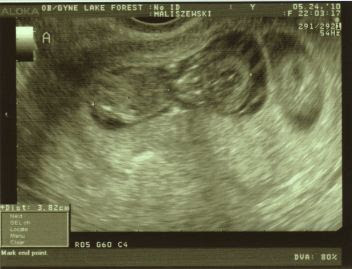 They were both moving around...bobbing their heads and kind of squirming as they will. It was very strange and wonderful to witness.
Posted by Knitting Up A Storm at 12:11 PM 8 comments:

Just stopping by. Don't have pictures yet, but I did visit a local knitting shop that was going out of business and put a little dent in the pocket for the two rugrats in my belly. I started a blanket with yarn that I purchased a while back, but decided against thin yarn (I have two of these things to knit up), and frogged it. I'm now knitting with a half wool/acrylic blend that is almost like unspun bulky wool. I plan on knitting a good chunk of it at the week-long reunion coming up.

Anywho, I just wanted some thoughts from you mothers who have delivered multiples. I used to be hard-core on the C-section notion (about 80% of expectant mothers now have them if they have multiples) because I watched/heard stories about how mothers went through hours and hours of labor just to only have to do the c-section anyways. One example was two of the heads was at the exit or another was one was in the correct position, but the other turned the opposite way. I just don't really know yet what the true risks are for a C-section, which is something I plan on asking my doctor at my Tuesday visit for a second ultrasound. I was working the other day when I asked a lady who had twins if she delivered naturally, and she said "yes," and without any problems. However, this was her second pregnancy...they supposedly get easier by the pregnancy.
Let me know if you know someone or you yourself have gone through a multiple delivery.
Posted by Knitting Up A Storm at 3:48 PM 4 comments: