The Legend of the Seeker 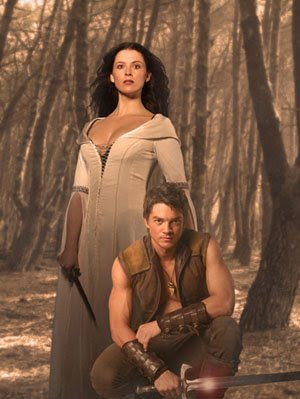 OMG. I heard rumors about my old favorite fantasy series being made into a movie or TV series...and I finally found out that it already has three episodes out!

This television series is based (hopefully a little loosely) off of Terry Goodkind's "Sword of Truth" series. There are many books, and much violence-which I didn't care for-so I was glad to see that the 2-hour premier of the first two episodes captured the main events while watering down the evil. The books are really good, if you like epic books with romance. I'm guessing that the first season will cover Goodkind's first book, "Wizard's First Rule," and if it's a hit, the next seasons will cover the following books? I still have to research it. Joe and I bought the premier off of itunes the other night because the videos aren't posted free yet, and I'm thinking of buying the next episode because it aired yesterday.

So far, it seems that they are following pretty close to the book's main plot & casted pretty good characters for the roles. I would have liked to see Kahlan with longer hair & Richard as a taller & more "rustic" character. Oh well. The actors do grow on you though.
Posted by Knitting Up A Storm at 7:38 PM

love this new series, love the books I've almost read them all I'm on the 10th book.