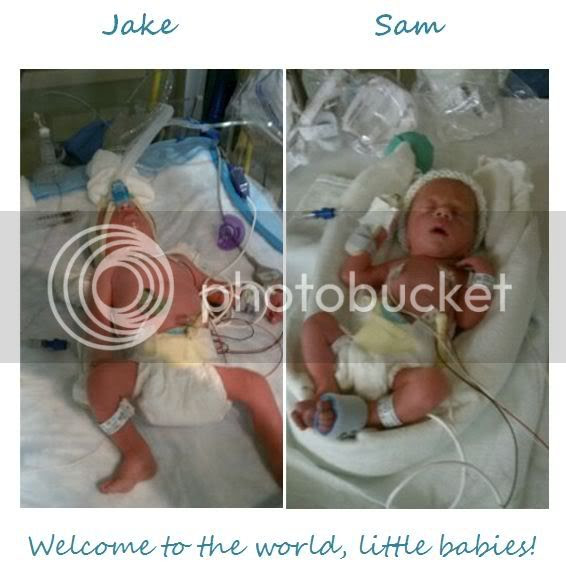 Here's the short story, since I'm still in the hospital recovering from my C-section and I'm pretty pooped:

Tuesday, a week and a half ago, my obgyn found out that I was 2cm dilated and was worried about preterm labor, of course. She set me up to have another NST and doctor check-up 2 days later (Thursday) where I was still the same but the NST showed signs of contractions every 8 minutes. At that point, I was admitted into the Labor Center to stop the contractions, and I spent the day getting shots and steroids to help the boy's lungs to develop faster just in case I was to deliver anyways. I was sent home that night instead of spending the 24 hours and was scheduled for a Monday checkup and NST, which was fine. However, they also scheduled me for another Level II ultrasound because the Tuesday ultrasound showed a weight discordance between the boys of a pound. (Really, this IS the SHORT story.) At the level II, the doctors found that Sam was 2 pounds and 11 oz and Jake was 3 pounds 15 oz and that Sam's placenta was starting to actually revert in blood-supplying performance. The doctor says that because be didn't gain really anything all week and the Doppler showed a weaker supply than his brother...it was possible that keeping him in there longer just more maturation could actually cause more problems and possibly death if long enough. He recommended a C-section THAT NIGHT or the next day or so.
Still in shock, we waited for my regular obgyn to give me a call and give her opinion, which was the same. Freaking out, that evening we got our affairs in order and Thursday 10/28, I was C-sectioned at 8am. (Scariest event of my life, and if you guys want that story and what it's like, maybe I'll tell the tale later.)

The boys are doing well. Baby Sam, even though a pound smaller, is breathing well and is in an incubator, while his brother Jake was on a breathing machine and has done a lot better to the point where he is aided with oxygen with just one of those breathing tubes instead of a mask. They both now have wires hooked up all over them and one running through their mouth, but they both seem to be doing better and better with each visit and not only little sam sucks on his pacifier...we found out last hour that Jake can do the same, if motivated. We left them both happily sucking on their purple hospital pacies. (Little sam will actually hold the pacifier with his little hand too.)

As for me, the "day after" isn't fun at all. The morphine that lasts for 24hours really shows how important the medicine was...and the nurses kept telling me to stay on top of the pain because it's hard to control it once you get beyond 3 or 4 out of 10. Well, I was doing fine until the afternoon today where I really started feeling the incision, as well as backpain. I've been popping pills like a madwomen to get it controlled again and I'm looking forward to finally getting past the little "pain hump" of a couple of days (or so they say). I will be released Sunday, and have not held my babies yet...do not know when they will come home (Sam might come home sooner than his brother if he keeps it up, as well as his weight). I ache that my babies will stay in the hospital for maybe a couple of weeks or longer.........(their due date was 12/11/10)

I still can't believe I'm a mommy and I still look at their itty bitty, fragile bodies in amazement and awe.
Posted by Knitting Up A Storm at 10:30 PM

Awww congratulations! My prayers are with you and your teeny tiny little ones.

The most wonderful years and the fulfillment of your life started with your babies. Well, I am sure your husband will find this to be true for himself. I am so happy for you.
I think that God made very specially gifted people/parents to raise boys.
God Bless

WOW What an amazing story! I hope your babies get strong soon so they can start their life with you at home!

Hope you feel well soon. The babies are so cute. I hope they can come home soon too :)
Congratulations!

Congratulations! My second was early and spent 2 weeks in NICU. Yes, it was tough but they are in great hands. Take care of yourself so you are ready when they come home.

I am sorry they had to come so early, but glad they are alive and doing well! Prayers and positive thoughts to you and your family.

Hi! I'm new to your blog (found you through Ravelry), but have went through and read your archives. Your writing is very fun to read and I was amazed at how much we seemed to have in common! I am so excited to see you had the babies. They are adorable! You all are in my prayers for speedy recovery and growth. Congratulations! There is nothing like being a mom!

Theresa
www.full-time-job.blogspot.com (although I have been away for a couple of months!)

PS...I just cast on for $5 in Paris this afternoon while watching a depressing Purdue game (yes, I know you are an Iowa grad, but, hey...Go Big Ten!)!

Congratulations!! They are beautiful! So glad to hear they are doing well. Give them time to 'catch up', and they will be home before you know it. My first was 6 weeks early, and 4lbs 2oz. She's 9, and rugged as a bear today. Best wishes to both of you!

Congratulations! I'm glad they're both safely here and doing well. I hope they keep doing well and get to come home very soon! I also hope your recovery is short.

They are beautiful! I hope that they are out of he hospital very soon and that you get to hold them soon. My eldest was in the hospital for 6 weeks after birth so I know what you are going through. Hang in there! Moving around and getting out of bed really helped the pain with my csections.

Whew! That's a scary situation. I'm glad everyone involved is doing as well as can be expected :)

oh wow!! Congratulations! I was shocked when I checked in your blog tonight. I am due on 12/8 but wont be allowed to go that long because of diabetes & this being my 5th c-section. You will get past the bad days of the surgery...but you have to move & take showers a lot!!! and your boys are so precious!! again Congratulations! what a joy! will be praying both boys come home soon!!!

Congratulations! Your babies are beautiful. I hope everyone gets to go home healthy soon.

Oh My what a suprise..I expected to see knitting not babies...THEY ARE SOOO CUTE. I'm so glad they are doing well and they'll be home before you know it.
Prayers for you and your little guys. Keep us posted and CONGRATULATIONS!

I hope you and the hubby are doing well even after the few setbacks! I hope you can hold your babies soon, they are so adorable!!

Congratulations. I'm happy to read you are all well and healthy and I hope the babies continue to grow and be strong.