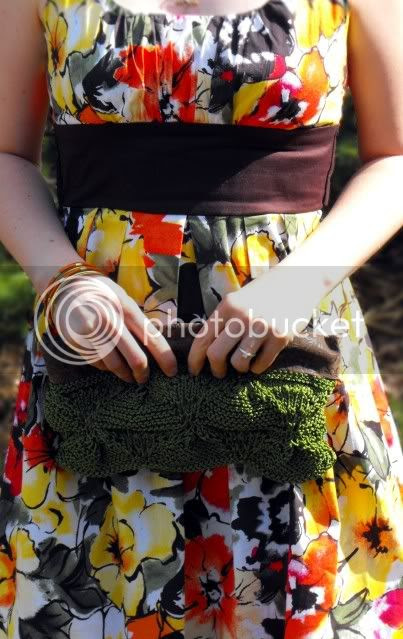 The Fake-a-Gamo clutch is finally completed, just in time for Easter Sunday! The decision of whether or not the top of the clutch should be light brown or darker brown was still half-and-half, even after all of your help (thanks, by the way!!)...so I ended up flipping back and forth between the two choices until it finally seemed obvious that the darker brown looked best. I am now proud to carry around my clutch version of the knitted Ferrogamo purse that sells for 1,600 smackeroos. 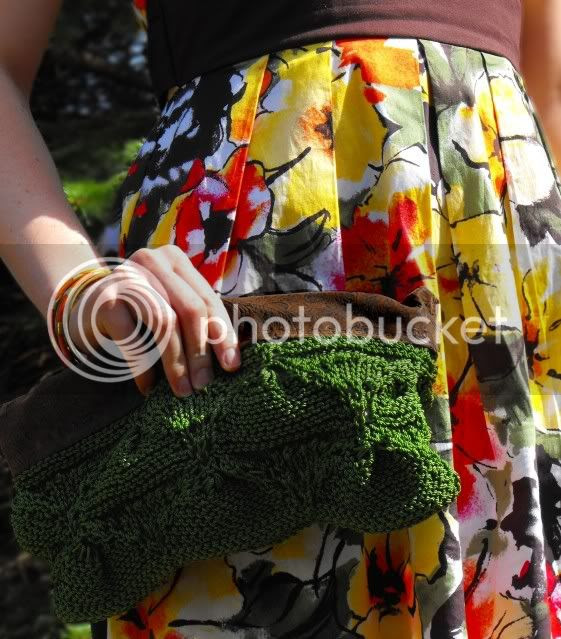 I enjoyed working with the Hilos La Espiga yarn. It's a little tough to adjust to, what with the rope-like texture mixed in with it's silkiness, but the bag is completely durable, unlike my first and second Fake-a-Gamo purse. I would definitely consider making myself another one of these in another color. I'd like to add more definition to the texture by tweaking the pattern a bit. As for the guts of the clutch, I had a bit of an argument with our sewing machine-which refused to work-so I had to borrow my FMIL's sewing machine for the silky liner and sewing part of the suede top. Other than that, I had to hand-stitch the entire top to the clutch. I've got a several holes in my fingers, but the effort was well worth it and all I can say now is: Hello Spring, and goodbye large clothes and bags!

I love your dress! I need to find something like that for graduation. The clutch is cute too :)

Thanks!
I got the dress at Kohls, if you have one of those around where you live. :)

I love the clutch, I must make this!!!

I love your dress very much specially floral print is so amazing!! I would like to browse kohls for one of the same.

Hey! Awesome clutch..I wanna make this in white and satin lining....can you plz pass the pattern?? It tried to contact Kate through her blog but I havent received any reply from her...I wanna make this for my mom's birthday (9th Oct).

Hey! Awesome clutch..I wanna make this in white and satin lining....can you plz pass the pattern?? It tried to contact Kate through her blog but I havent received any reply from her...I wanna make this for my mom's birthday (9th Oct).

This is all I can give you, and I give all the credit to her. I re-wrote it because I felt there were some bumps in the pattern:
http://knitting-up-a-storm.blogspot.com/2007/02/fake-gamo-bag-re-write-instructions.html

HOWEVER, watch out for the first row 10 where there is a pen ('). I think at the end of the row you stop there and then go straight to k3.

Also, My clutch is a smaller version, you'll just have to stop early and tweak it too to look like a clutch... no written pattern for that.

Wow! Thanks for sending me the information. Kudos to all of u who figured this out. Its a beautiful pattern and totally worth the obsession :)

Will make mine and send you the pictures soon..

Ooooh! More questions: (sowie!)
I was going through the pattern. So triangle pattern 1 and 2 are to be made and repeated in that order? But wht do repeat 1 and repeat 2 mean?