So, I'd rather like to believe that it's truely Spring now...regardless of the new snow last night, and the chilly weather that likes to linger in the air still. You know what that means: Spring cleaning. 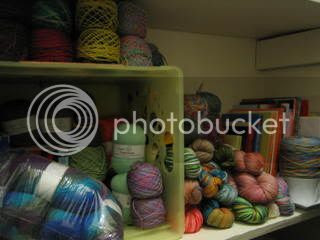 I decided to jump into the black hole that is my walk-in-closest (if you can really call it that), and take out all of my "school yarn," and only select those that could possibly be knit in 7 weeks, plus several extra for the looks and/or leeway for more choices. Some made the cut-off, some didn't. Some were taken home just for Spring Break and will return once more...(da-da-daaaaaa.....)
Here's after the weeding out: 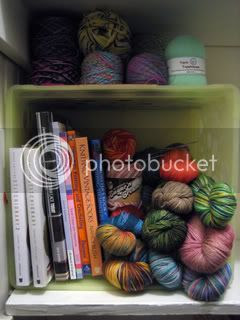 Books, yarn, clothes, and what-nots are now missing. The shelf looks rather baren now... but it's definitly neat & skinny. Who really needs more sock yarn for only 7 weeks anyways?

I was a dummy, and realized only 2 days before the holiday that I had the perfect skein of greens & white for St. Patricks' Day. Oh well. Maybe I'll save it for Earth Day...

I've been exercising a lot lately, and am enjoying the luxury of going to the health club in my hometown, while I'm on Spring Break. I'll miss it greatly when I go back to Iowa. Their elipticals are amazing, as well as being able to swim without having to take a bus to the campus fieldhouse. It was a great graduation present. Now, I just have to "graduate." (hee-hee.)

The Harry Potter knit along on flickr is going great. Look what Squib-Stitcher whipped up in a couple of days? Look familiar? She knit up my "Simply Ginny" socks in honor of good 'ol MollyGinny Weasley!(yeah, I need to read the 7th book again...) Actually, she's been whipping up pairs of socks faster than lightening. She already finished 3 HP socks for the knit-along, while I only did one so far. (*sigh*) I have to start working on my Hufflepuff/Hawkeye socks soon, before they become Alumini socks. 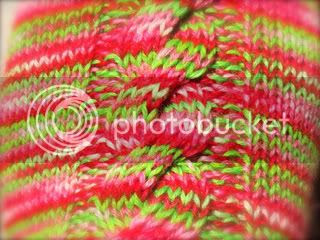 Kudos to Squib-stitcher, Dreams in Fiber, Bobilicious, and all other HP knitters who are apparently doing more work than the dang hostess.

Oh, and by the way... I hope you all had a wonderful St. Patrick's day. Don't laugh, but I baked this cake, cut it out into a shamrock, and made a cream-cheese frosting with coconuts inside. The worst part is that my mom was poking fun of the "stem" of the leaf. You can only imagine what she said it looked like. *Oh dear. What am I going to do with her?* 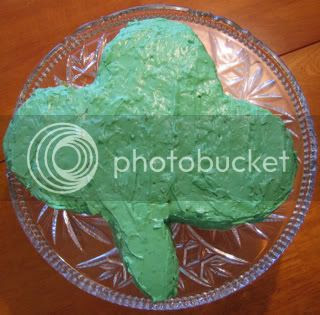 Let's just say I had my fill of St. Patrick's day. I had it THREE days in a row. Yeah. Eh.
Yeah, I know. The cake does look like a peice of crap. It was hard though.

New craft #1 has almost been completed. Pictures are to come (later).

Posted by Knitting Up A Storm at 2:09 AM

Actually, they are Ginny's and not Molly's. According to HP Lexicon, Ginny's full name (as revealed by JKR in interviews) is Genevra Molly Weasley) :)

Good job with the cleaning. I need to do that soon my yarn stashes are getting a bit messy.