My own little Africa 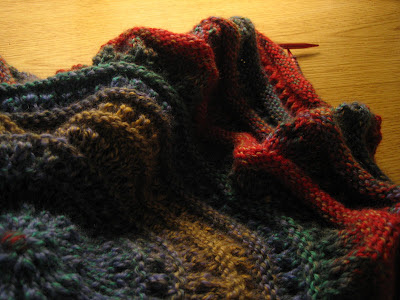 So, ok, I ordered some yarn last week. That doesn't make me a bad person. Heck, everyone deserves a treat once in a while. I just passed over hurdle #1 of my first week of "hell." I finished one heck of an awesome 14 page short story, a prehistory paper on Australopithecus afarensis, a small quiz in Earth Systems, a major quiz in Linguistics, and an exam in Earth Systems. Just in one week mind you, not to mention assigned readings and other such things to do to make you pull your hair out. But, what I didn't anticipate was Joe introducing me to another sweet evil of his last weekend, the show "Lost," that abc.com has loaded almost 4 full seasons...all for the taking. So, I watched a couple. And a few more. And a few more...just clicking away on my "Ripple Reading Afghan." WELL, I studied, wrote, studied wrote. Than I watched, watched, watched, and watched (while still knitting with bleeding eyes [ok, strike the bleeding eyes]). And I watched, watched, watched all week all until today, when I'm about several episodes into season 2. That's what, 29 or 30 episodes times 45 minutes. You don't think I need to seek a little E.A (episodes anonymous) meetings, do you? If my eyes aren't bleeding, than my fingers are probably going to. I'm up to, what, 576 stitches p.rd. on my afghan.

But this is my little Africa. My break. My new obsession(s).
I'll rondez-vous again with you all when I get back from the Safari in a few days. I've got 2 more exams to kill still.
Posted by Knitting Up A Storm at 11:23 PM

So I just finished watching over half of season one...all today. Your blog happened to be the first "non lost" thing I looked at online all day. It cracked me up to see what your post was about!

I heart Lost in a big way! I missed most of the first season but then my sister brought the DVDs over and I was totally hooked. It is the only show that I miss now that we got rid of our cable. I faithfully watch it every Friday online. All the twists are driving me crazy (in a good way).

All Lost addicts UNITE! I love that show--never miss an episode.

Your afghan is looking very pretty. Love all the color in it.

I did the same thing with LOST. I got through all the back episodes within a week.

I LOVE your blanket!
What kind of yarn is that?
It looks lovely. :)
As for addictions to TV shows, I think that LOST is pretty high on my list, along with Six feet under, big love, dexter and the sopranos. I think I have a problem-hahahah!

Enjoy it! Sounds like you do deserve it! I think that blanket looks fantastic!