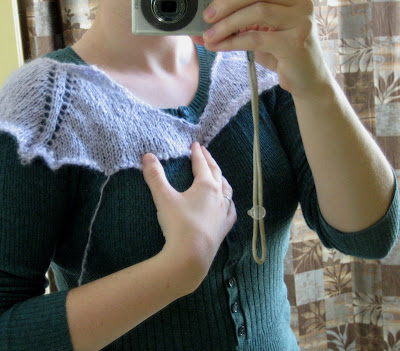 Dearly beloved,
We are gathered here today to pay honor to the late cowled raglan. It has lived a good full life during the short week it was on the bamboo needles.
It's sibling, the top-down that developed cowled neck-material first lived an even shorter life, and I have faith that the two raglans are in heaven together, enjoying their peace.
I'd like to now say a few words about the late raglan before we part today.
The raglan started off well. It was on the right needles, and if it were anything but a cowled raglan, the stitch amount would have been spot-on. However, I kept on knitting and knitting this poor little bugger, knowing the risks that I might have to frog again. However, no self-loving knitter would really want to frog it if they had to. And so I kept knitting on. Until the stand-still. I had this squirmy feeling in my stomach that the neck just looked to wide, even for a cowl. I wondered if it would just fall off my shoulders. By this time, I was already iffy about the gauge because the stitches were so squished on the needles, and even getting them flat would prove to have numerous results. The yarn is just so stretchy, naturally.
Sometimes, you're in a really detached mood. Luckily, that was the right time to decide to just frog it altogether, even if the raglan was fine. I really didn't want to get half way down the raglan and find out that it needs total reconstruction. As you can (or might be able) to see, the front is a little wide, and the neck area is much to wide, even for a cowl. The better thing to have done was to do increases after every couple of rounds. That would require faking it though, since I was going to use YO's as the increases.
Here's the plan now. The raglan is being constructed bottom-up now, and I will be in more control over how the top is formed for the cowl. Anyways, the sleeves might look prettier in the rounder form (for bottom-up method versus the V-shaped top-down), and I'll save the YO's for a different raglan. I'll be sure to post some pictures when my meek WIP has grown some more.
Posted by Knitting Up A Storm at 5:29 PM

I hope the bottom-up works better for you! I like your new layout, too - very pretty.

A sound plan... look forward to seeing it!

That's a funny way of writing about frogging, but it's good! I hope the bottom up plan works better for you.