My FMIL and I drove out to Iowa this weekend to go to the Iowa vs. Northwestern game. I haven't seen my guy in, what, 5 weeks (that tends to seem like a lot after having him spend all summer there as well), and I was très excited to see him. I charged my camera and erased nearly all pictures on it to take loads of pictures of us, and also Iowa City, and what I now have on my camera is this: Zada (Joe's puppy). 10 pictures of her, and not us. 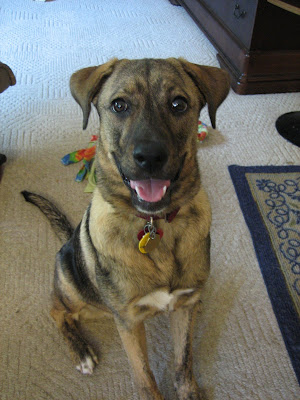 You know how that goes,..."Oh crap! I forgot the camera" on nearly all occasions. I was pretty disappointed with myself. We spent Friday evening eating out and then dancing at Jake's bar (which after pre-gaming and two strong drinks in a single hour, I was "too drunk to dance." C'est moi.). Saturday-game day-was scolding hot. I was miserable, so Joe and I walked back to his apartment a little past half-time. I'm super sad to have left him on Sunday, but we woke up and ate at a bagel shop before I left, and told eachother that we would see one another in under a week again...because we are going to St. Paul for his cousin's wedding on Saturday. So, guess what. I have to drive all the way back to Iowa City this Friday (only a 2 hour detour, they assure me) and then hop all the way to St. Paul. Thank God for my Navigation system. I've never even driven to Iowa City, let alone being the only one in my car and then driving through another state I've never been in. "Vickie," my navi, will show her undying loyalty and dedication to me, and get a "map illiterate" soul where it needs to be. Watch "I, Robot," if you don't get the whole "Vickie" thing. We literally talk back to eachother.

Reading note: I just finished Jeffrey Cohen's "Some Like it Hot-Buttered" on the way to Iowa (it was a little funny, but not too laugh-out-loud like some suggest), and finished Alice Hoffman's "Ice Queen" from start to finish yesterday. "Ice Queen" was a little depressing (it's suposed to be), but intriguing. I thinking I'm now up to 21-22 books this year! 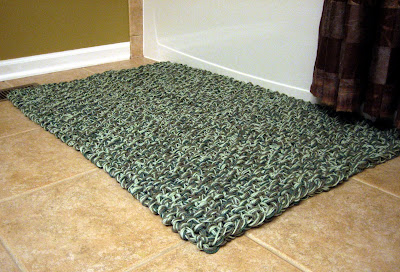 Voila! Another FO in the same week! Here is Part One to my chunky Bathmat extravaganza. If you've read the last post, you'd know that they were knit on a honking size 50 US, 5-stranded. 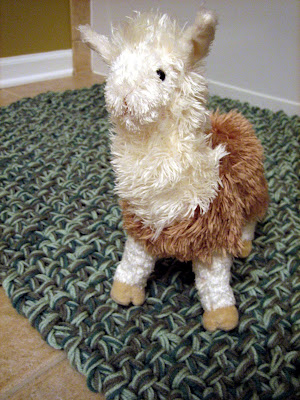 Mr. Paci seems to be a fan of the bathmat. I don't speak Alpaca well, but I think he told me he wants a chunky bed to sleep on. Standing upright on my desk 24/7 doesn't suit him like it used to. 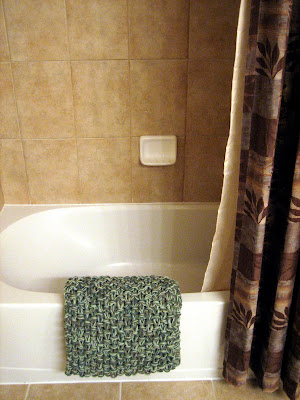 I was initially knitting this bathmat for my future apartment/home. But, having been in Joe's "quaint" apartment, I think he is a wonderful recipient of this knit. Heck, he doesn't even have a mat at all in his bathroom. He's just begging for one, isn't he?
Posted by Knitting Up A Storm at 7:10 PM

Nice job on the bath mat - it looks great!

Wow! That is one fabulous bath mat! I want one! Can you provide a few more details on the yarn and such?

What a great idea!!! I love it! I'd love to know what yarn you used!