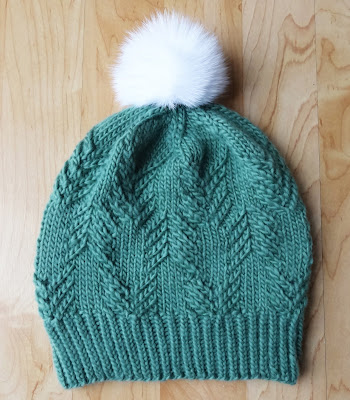 It's been a cold and mostly blistery winter (again) in the northern Chicagoland area. Today is the first mild day in a while (40 degrees F), and we are enjoy it every bit!

It's been dark and gloomy the past couple of days, so I've been waiting to photograph this FO in some natural light, but had to compromise with what little daylight is coming through this overcast day.

I just feels like a pour-yourself-a-steamy-cup-of-tea-and-finish-the-ending-of-your-book (which I did) kind of day.

This hat is one that I picked out for our 1/1-2/1 2017 KAL on my "Knitting up a storm, the blog" facebook page group. I have posted a video on how to work these 2-st cables without the use of a cable needle. If you attempt this pattern, or any with tons of 2-st cables, be sure to check out that video. You'll have to be part of the group first to see the video. 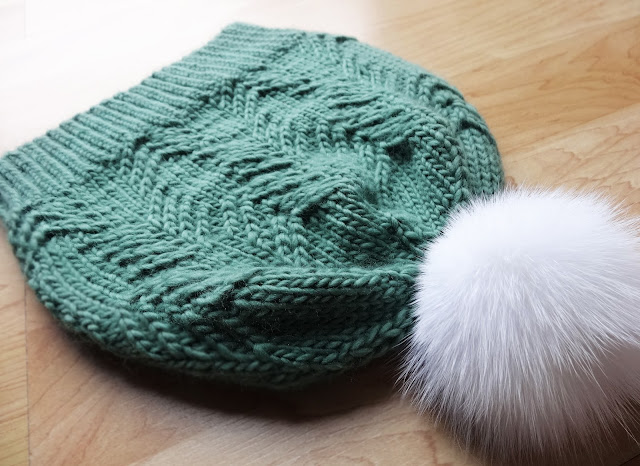 I enjoyed this knit. The cables were not hard, the texture is interesting. However, the hat itself is not long or slouchy. It almost needs a little bit of blocking to get more ease. At least using the yarn I did, it's almost suited more for the head size of a pre-teen.

If you're looking for a more slouchy hat, you'll want to throw in several more rounds before decreasing and/or use thicker worsted weight yarn than suggested (like an aran weight). The brim of the hat just reaches my ears. 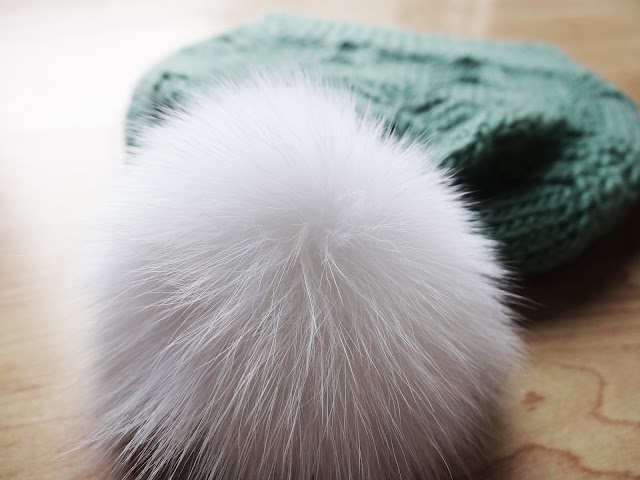 I used a fur pompom. It seems to be the all rage now for knitted hats. Ironically enough, it's hard to find at a franchized craft store. I ended up finding this pompom from HobbyLobby on a keychain, since they did not sell fur pompoms in the knitting or sewing section (No luck also at JoAnn's).

I removed the keychain part of the pompom and no one will be none the wiser. I just wished that I could have found a natural light brown pompom that would have matched this hat a little more. I think the contrast is a little too stark for me.
Posted by Knitting Up A Storm at 12:32 PM