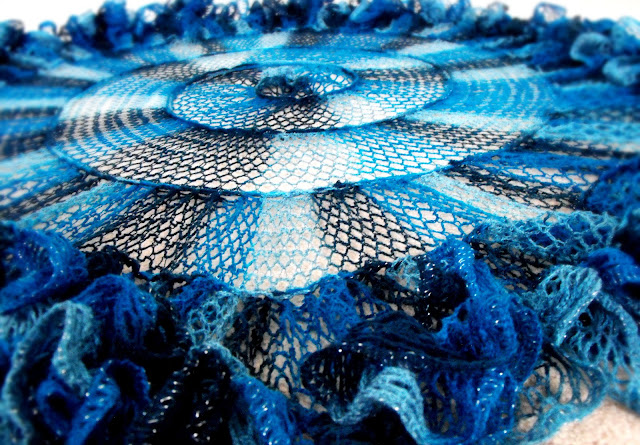 The Spiral Sashay Shawlette is complete! It came out beautifully and I plan on selling this as one of the showstoppers at my KUAS knitting booth Nov. 17 at the Craft Show. This pattern was inspired by Karinknits' Kelp Forest Shawlette, that really is nothing more than knitting with the Sashay Yarn in a circle (or spiral). I took some liberties of changing how to start the beginning of the spiral because my yarn brand was different and it formed more of a "basketball hoop" than a shawl when following her instructions to a "T." I spaced out which holes to knit in and which yarn loops to use as the spiral grew.

Pattern: Modified Forest Kelp Shawlette.
Needles: US 11's (but the size is not crucial to the shawl, so much as to which loops you use from the yarn).
Yarn: 2 skeins of Red Heart's Sashay Yarn. 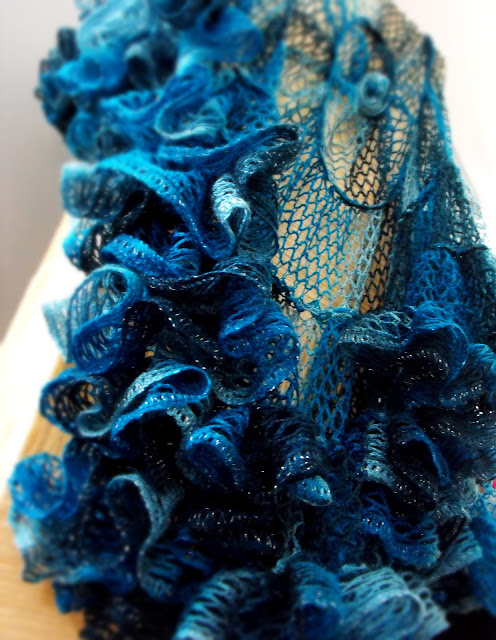 If you really like this yarn, and plan to use the Sashay Yarn rather than the "Katia Triana," here's what I jotted down on my Ravelry page:


"Using Sashay instead of the designer’s yarn throws the pattern off a bit, and can land you with a narrow tube for the beginning, even following the pattern/video tutorial to a “T.” Here’s my hints, after dozens of failed “tube” attempts:

At the beginning, spread open the lacey yarn and fold the beginning of the yarn in half lengthwise (hotdog style) so that the “wide band” edge is to the left. Only cast on 3 sts along the frayed edge of the eyelet fold to reduce bulk. Make sure you don’t cast on right at the frayed edge, but along the row under it…you don’t want to have those stitches ripped out by over-fraying. Then do your bind-offs to reduce it to one stitch, like the pattern asks you to.

IMPORTANT: For Sashay yarn, don’t use the very next “thin lacey loop” as working yarn. Use the second loop and later the third loop once your diameter is larger (about the 3rd bind off ring) This helps reduce rufflage. At least for my shawl. Also, bind off very loosely.

To start, I completed 13 sts worth of skipping every other “wide band” hole (if you have no clue what I'm talking about, one side is "lacey," the other side is a thicker "wide band")  instead of doing that for 10sts of every other hole.

Then I worked in the 4th-5th “wide band” hole and started using the 3rd “thin lacey” loop (working yarn). Continue working the 5th "wide band" hole and 3rd "lacey loop" until you run out of yarn. " 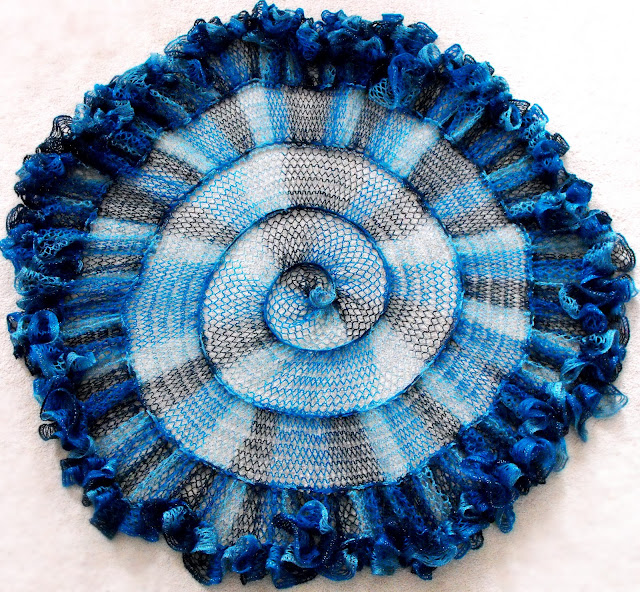 The effect is beautiful. It's a bit of an "acquired taste," what with all of the ruffles...but even if you don't wear it, it looks beautiful drapped over something in your room (or craft room, if you're that lucky)! 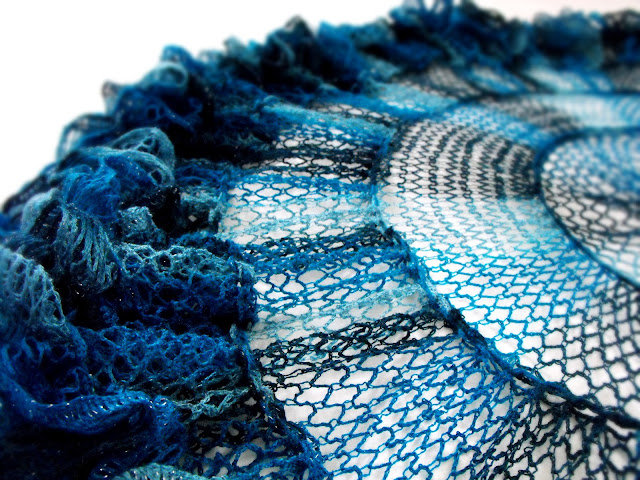 The shawlette is beautiful. I'm in the process of knitting one myself using Panda Sashay and am having problems with it. I'm up to knitting the 56 sts but it doesn't look like a big spiral like yours. How long before you noticed it looking right? Any ideas would be appreciated. Thanks Christine

This might be a dumb question. How do you wear this shawlette?
Thanks,
Jamie

Any chance you will do a YouTube video using the Sashay yarn to make this?

There is already a video tutorial on this, by the original designer: http://www.youtube.com/watch?v=_oSixjG16kU&feature=youtu.be

I hope that helps,
Anna

I finally did it, using a combo of your instructions and the original instructions. Thanks for taking the time to make it easier on the rest of us.